GETTING OLDER IS INEVITABLE. GROWING UP IS OPTIONAL. 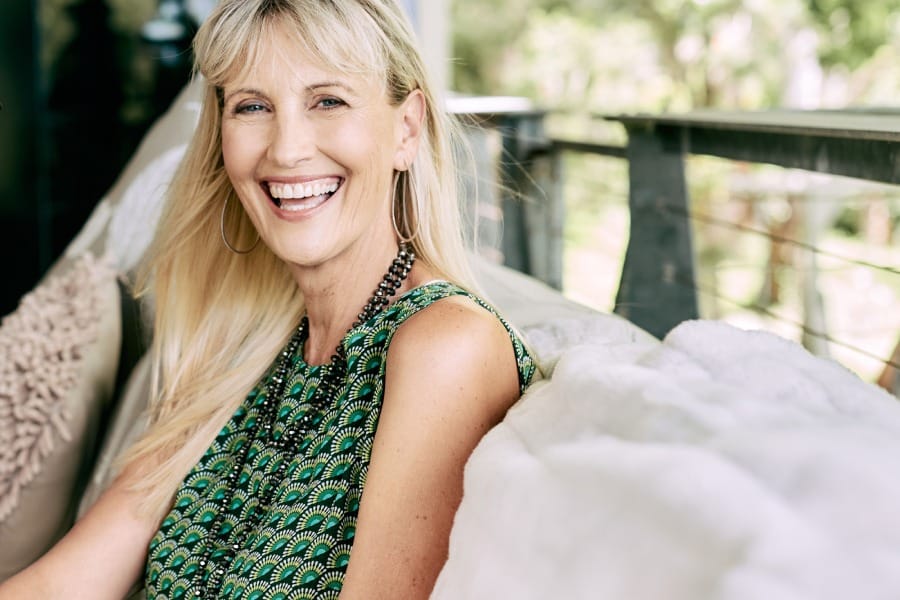 GETTING OLDER IS INEVITABLE. GROWING UP IS OPTIONAL.

As a child, you would count down the weeks before your birthday and could not contain your excitement as the date drew near. The gifts, the spotlight, the celebration – all brings so much joy! When asked how old you are turning, you’re proud to exclaim how much older you are about to become. So, at what point does the anticipation and excitement change or turn into a time of criticism, a time that defines who you are or where you ‘should’ be in your life? As an adult, it appears there is an invisible timestamp, a line in the sand, where at this point you should be doing certain activities, and not doing others. For women, this includes such things as cutting you hair short by age 30, having kids before 35 and giving up on exciting life after menopause. There is a dramatic shift that takes place – but the question is when does that shift happen, and more importantly why?

Have you ever found yourself thinking I should be at ‘this’ point in life when I reach ‘this’ age. When it comes to aging, society’s pressures and expectations throw our perspectives out of alignment, and for some it’s enough to change the way we act or speak about life entirely! You often hear people say, ‘Oh I’ve been 37 for 5 years now! Or ‘50 is the new 40’. And for others, 40 is the new 30. I recently had a friend who announced she would be having a ‘Twenty-Twenty Celebration!’ For many, it’s any word combination to avoid speaking their true age out loud.

Not, however, for Barbara Pease, CEO of the wildly successful Pease International, who is approaching 60 and who is ‘ageless’ in her approach to life. She is Australia’s most successful female author writing 18 Top Ten bestsellers including 11 number ones translated into 57 languages, has sold over 30 million books, has had 4 international stage plays and a No.1 Box Office movie in Europe and given seminars in 60 countries. Achievements like these can come with an expectation to retire, to be ‘accepting of age’, but for Barbara retirement couldn’t be further from her mind.

Barbara explains that turning 60 doesn’t define her, and it won’t change the way she lives. Having led an extraordinarily successful life where she has managed to overcome countless hurdles and achieve huge goals when the naysayers told her she couldn’t, Barbara says,

“That simply gives me more determination to keep going.”

By age 12, Barbara held 3 jobs and was a star pupil at school.  Her early working life saw her climb the ladder and surpass those who had worked at their jobs for years. Her career advanced through the ranks, and by her early 20’s Barbara was approached to work for a regional newspaper, and before long was managing the feature section of the newspaper, personally selling over $1 million

worth of advertising in her first year.  She also created her own modelling business, selling herself and others into TV and media commercials and corporate videos.

“There were times I did wonder what would happen if I failed, but I knew
I wouldn’t, because I had the drive and I knew I would never give up.”

Barbara uses the art of visualisation and the power of affirmations to achieve whatever her focus is at the time. This was highlighted during one of Barbara’s most challenging life experiences – the journey through IVF.

“There were so many setbacks and challenges, and plenty of people telling me I would never conceive.”

At the time, Barbara was in her early 40’s and was repeatedly told she was too old to attempt childbirth, and that she statistically couldn’t produce viable eggs or successfully carry a pregnancy. In addition, Allan had recently undergone radiation for prostate cancer, so their already low odds were reduced even more – less than 2%! Barbara’s ageless and positive approach to life gave her the determination to keep going.

“Even though the IVF process was was filled with poor statistics for me, I made the decision to not take on board any negative talk I was given by many of the doctors, relatives and others. I made the decision to be positive about the outcome I wanted, and I would not consider failing. I knew that my body would do what I instructed it to do.”

After several disastrous IVF attempts, she was finally pregnant! Barbara began talking to her baby foetus and giving him instructions. She would tell her baby what he had to do and why and would tell him what she was currently doing – cooking, jogging or working. She even walked around the house with baby clothes draped over her ever-growing belly and even wore a bib around the house!

“It felt like I was meant to go through all of this to fully understand what other women would feel if faced by the same IVF challenge – the injections, the hormonal roller-coaster, the negative naysayers, the poor statistics, the failures.  I believed this experience would give me the skills to mentor other women to achieve their desire to get pregnant.”

“I’m often asked what it’s like having a new family as an older woman. It’s the best! I was already experienced at raising my other kids and now have more time and resources to do it well.”

At age 43, Barbara gave birth to Brandon, who had affectionately acquired the name ‘The Impossible Baby’. And then, to everyone’s amazement, she did it again by giving birth to Bella at age 46! 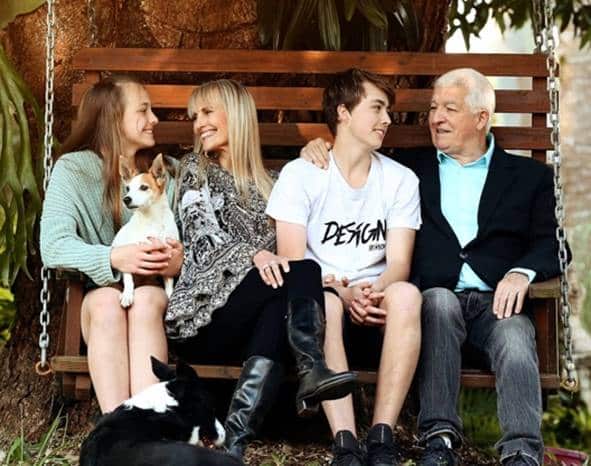 Barbara with husband Allan and their ‘Impossible Babies’.

“What matters more is how we feel physically and mentally, and to hold the outlook on life that anything is possible, because it’s true. I don’t want the artificial barriers of age to stop me from doing anything, so I squeeze as much life as I possibly can into each and every day.”

Little has changed in Barbara’s attitude towards life as she approaches 60 – her day typically starts at 4.30am where she finds she is the most productive before her family wakes up.  And together with the duties of being a mother, and corporate CEO, she still finds time to drive her daughter to basketball training and tournaments and take the kids to school.  She is also the Patron of No More Fake Smiles, a Sunshine Coast charity dedicated to supporting victims of child sexual abuse.

Barbara lives by her own motto, ‘Don’t be pushed by your problems, be led by your dreams.’

Having defied life’s odds-on countless occasions, Barbara now teaches others how to turn their personal and professional challenges into triumph in her Coaching business. Barbara explains that it is these setbacks and times of despair (including global pandemics) that give her the drive to use her creativity, to look at a problem and think outside the box, and to turn a possible struggle into a new and often successful venture, product, or idea.

These personal accounts of the challenges and setbacks encountered throughout Barbara and husband Allan’s lives are shared in intimate detail in the couple’s most recent bestseller, The Answer.  The power-couple describe how they overcame countless hurdles and ‘impossible’ challenges and how you can do it too. They discuss the power of the mind, and the scientific research which explains why those who ‘Ask the Universe’ usually get what they want.

“The brain is incredibly powerful, and when you learn how to program it for success, your life can dramatically change for the better.”

“We can choose to limit ourselves to what society believes is appropriate for our age, or we can do what truly makes us happy, what challenges us and fulfils us. I teach people the latter – to write their own story in life, no matter what age they are.” 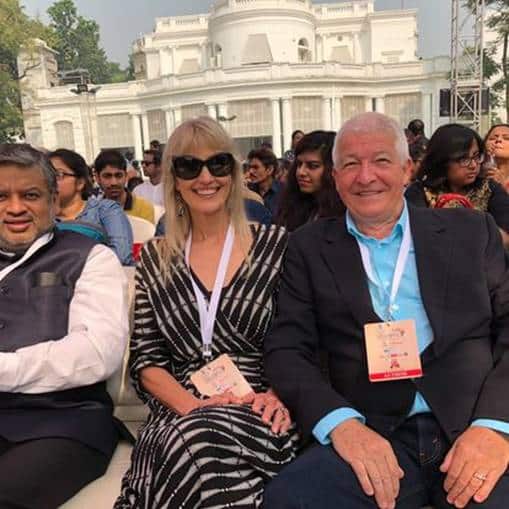 At a conference somewhere in India

“When it comes to age, it’s mostly the media, the advertising industry and old myths that purport to tell us when we’re past our ‘best-by’ date. This is simply not true. What matters in my life is that I feel good about myself and am making my own choices. If anything, turning 60 is a time for celebration. I’ve gained a wealth of experience and am entering my most powerful and productive years. I’m stronger, wiser, and more determined than ever.”

“Barbara Pease is one of the best personal and business coaches in the world today. In my experience recruiting and managing coaches in 22 countries, for more than 30 years, Barbara is in a class all by herself. She helps people to perform and get results better than anyone you will ever meet.”